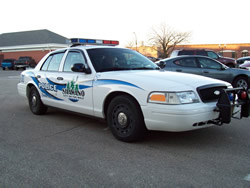 The Shawano Police Department started to use the Power Up NNL699-G in their police car’s engine, transmission & rear ends. The following results were discussed by Chief Ed Whealon to Bill Mongin president of MCS Distributionin Ed’s office.

Bill we have been using Power Up NNL690-G for a little over 3 years now. We have a variety of vehicles that are used by our department. Our fleet consists of Ford & Dodge vehicles. At times our equipment is put through extreme conditions and it is common that we have transmission & engine failures. Since using NNL690-G we have not had one failure with our engines, transmissions our differentials.

I also use Power Up NNL690-G in all of my personal equipment at home. The best results came from my 30 foot Seray Boat. It is equipped with two 360 Chrysler engines and two twin screw find drive units. The results were noticeable; my boat had increased power, easier starting, less engine noise and an improved fuel economy.

Please send your order via email to: powerup@centurytel.net